Mobilintec.Net
Tuesday, 11 February 2020
Facebook Twitter
Reunited with Mobilintec Team, and this time we will discuss the problem of damage to the Android phone Xiaomi Redmi Note 7 Pro which suffered damage no backlight display LCD.

Some things that can have caused the phone Xiaomi Redmi Note 7 Pro No backlight display among others:

Usually, if there is no backlight damage or no display on an Android phone, you will still be able to hear the voice of the phone ringtone and other notification tones, but because it is constrained by the not seen the picture on the phone will be It is difficult for us to do the Pengoprasian on the Xiaomi phone Redmi Note 7 Pro which is being constrained by the damage no backlight or no display.

What is the LCD and backlight on the screen?

An LCD is a digital display interface of your phone, it is an interactive part where you see what happens when you operate or tap on the icon, watch a video, play music or games, etc. When the LCD (Liquid Crystal Display) is damaged or destroyed, you will not be able to enjoy it as before. This is where the LCD backlight comes in, the backlight is a set of LEDs (Light-emitting Diodes) and fits well in the screen layer to provide illumination to the LCD screen.  When the LED multiplicands the damage, it's likely the screen will turn black without being able to produce images and light, which means you won't be able to see anything!

Step two, re-install the firmware on the Xiaomi phone
No display or no backlight damage on an Android phone could be caused by an error in the operating system found on the phone. Then you can re-install to solve the problem.
Read Also: Test Point Xiaomi Note 7 And EDL Mode

Step three, check the LCD display socket
To make improvements to the Xiaomi Redmi Note 7 Pro No backlight, you have to do the dismantling on the Xiaomi mobile phone, after that try to check the entire socket on the PCB board especially on the LCD display socket, it could possibly There is corrosion or rust contained in the socket, immediately do cleaning using the liquid alcohol and assisted by brushed, so that the socket condition is clean again, and do a resoldering when the socket encountered detached. This corrosion socket is generally caused by a cell phone that is exposed to water or other liquid so that no backlight damage appears. 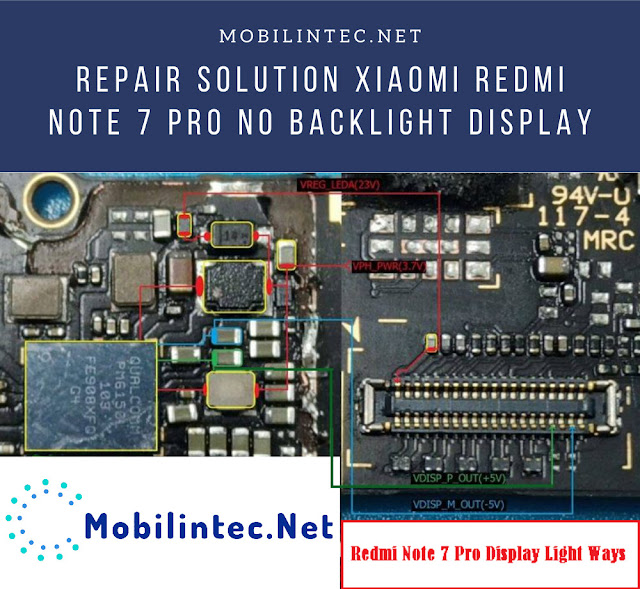 The following repair step can try to check the line on the Android phone PCB board Xiaomi Redmi Note 7 Pro which is experiencing no backlight damage. In the diagram image of the path that is connected to each component, you can do the examination by using the Multimeter, when encountered damage to the track, then can be done jumper path, for normal return condition and damage No The Xiaomi Redmi Note 7 Pro backlight can be solved.

Step five, perform component switching
With the diagram drawing guide, you can perform checks on interconnected components, if there is a defective component after checking and measuring using a multimeter, you can make changes The new component with the same value.

So some steps fix Xiaomi mobile phone Redmi Note 7 Pro No backlight display LCD, hopefully with a guide through the diagram image that has been given, you have got the best solution from the problem.

Please note, do check on any phone damage carefully, in order to avoid increased damage and will harm yourself. Thanks.
Facebook Twitter