Mobilintec.Net
Wednesday, 12 February 2020
Facebook Twitter
Solution Repair Samsung Galaxy J2 no signal network. If you are experiencing signal problems on a weak Samsung phone or no signal at all, this is a very bad problem, sometimes encountered no phone signal inside the house, but when we are outside the House Tau open signal appears But still weak.

In the issue of Samsung Galaxy J2 no signal, you certainly have trouble making phone calls, sending SMS messages, and also connecting to the Internet.

Some causes of a cell phone no signal among others:

To solve the problem of damage Samsung Galaxy J2 No signal, in this opportunity Mobilintec Team will provide some of the best solutions to overcome the problem

1. Change Simcard
One of the causes of cell phone no signal can be sourced from the Simcard operator provider that you use, it is possible that the chips can be found in the Simcard is damaged so that the signal becomes weak or no signal Sams once, His solution try to change the Simcard and try to reconsider whether the signal on the phone Samsung Galaxy J2 is back to normal.

3. Check the path and do the line jumper 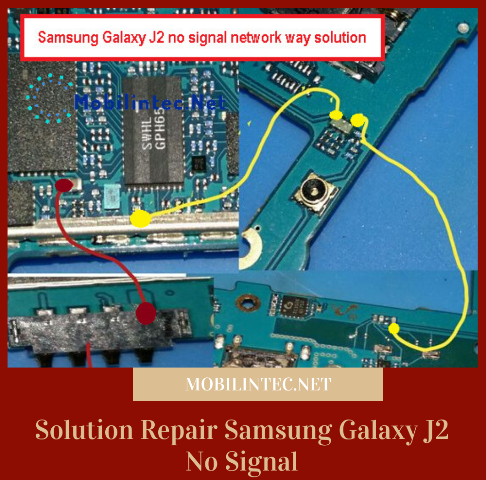 The phone has no signal bars Tau signal bar is very weak can also occur due to the path or internal components on the phone Samsung Galaxy J2 to multiply the damage, for its repair step, has been given a diagram drawing that can be a guide to be able to solve the problem.

To perform a check on the internal components, you must do the disassembly of the Samsung Galaxy J2 phone, so that the inspection can be done optimally. If you encounter a damaged path, you can do a line jumper for the condition to return to normal, the path of the disconnected component can affect and cause no signal bars on the phone.

4. Replace the components and IC PA
How to repair cell Phone no signal on Samsung Galaxy J2? You can check the component listed in the diagram image, check each component by using Multimeter, hen in Find the damaged component, replace it with new components that are of the same value, but hen after switching Components and the results remain no signal on the phone, then you must do the IC PA signal.  IC PA is very important to the catcher and emits a signal on Samsung Galaxy J2 mobile phone.

But how good it is before making a change to the internal components of the phone, better analysis of the simple improvements that were done, such as doing a hard reset or reinstall Firmware.
Read Also: How to hard reset / wipe data on All Type Android Samsung

So information and solutions repair Samsung Galaxy J2 No network, no bar signal or weak signal. Hopefully with this tutorial can be useful for those of you who are experiencing the same problem on Samsung Galaxy J2 phones that you have. Thanks.
Facebook Twitter