Mobilintec.Net
Friday, 7 February 2020
Facebook Twitter
The problem of damage no backlight Xiaomi K20 Pro can be caused damage due to the faulty LCD, rupture or cracking on the LCD, or the possibility of broken or short circuits on the components in the phone Xiaomi K20. For damage to the phone, components may include damage to components of the diode, capacitors, resistors and also coils.

Generally in case of no display damage or no backlight Xiaomi K20 Pro, then you can still receive phone calls and notification messages and other, does not mean the condition of the phone to be completely dead due to damage no backlight. But due to damage like this, the phone cannot be used at all, because it is difficult to see the menu in the LCD display.

Try resetting your phone by going to the settings menu on your phone > Select the Display menu or display > Adjust the brightness on the screen. It could be possible to change the brightness setting of your phone's screen, resulting in dim light.

The following way to resolve the no display light damage on Xiaomi K20 can use these 2 ways: 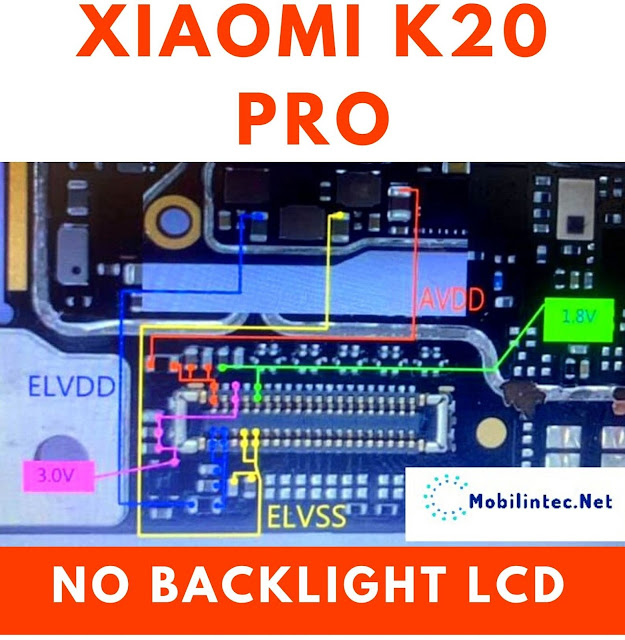 If after re-installing but not delivering the best results, then the next step is to check each path and also the socket of the LCD display connector. Resoldering in case of damage and also apply the line jumper if the path is interrupted due to rust corrosion.

Here's a check-in every component contained on the phone Xiaomi K20 Pro, notice in the image of the Sekema, clearly depicted each component is connected by the paths that have been depicted on the diagram, do Component with the same value when the component encounters a malfunction.

Such a tutorial to repair damage on the phone Xiaomi K20 Pro no backlight, no LCD display. That could happen as a result of various factors that have been described in this attribute. Hopefully, this information can be useful for all of you who are looking for such a repair solution. Thanks.
Facebook Twitter